With a sigh of relief, Hannah Feenstra can now sit back – along with the Ellerslie community – and enjoy her little treasure hidden in the midst of suburban streets. 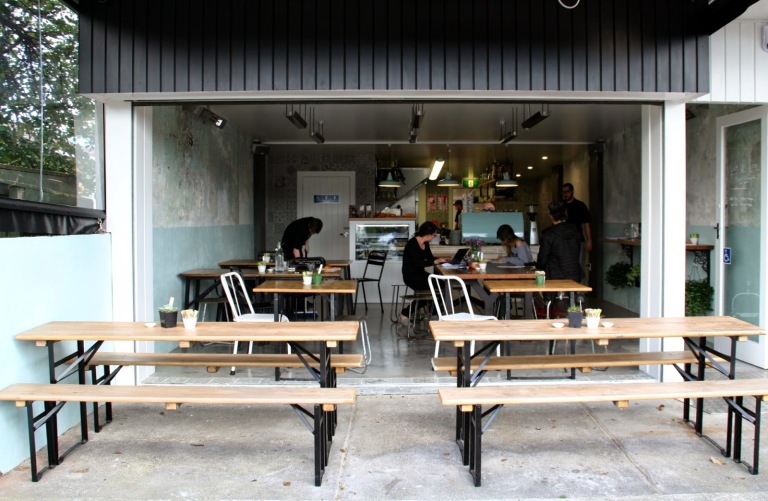 Open Table had only been open a single day when I decided to visit. Hannah, a friendly face I recognised from the Kickstarted clip, welcomed me in. Kind enough to take the time out of her day, she sat down with me over a cup of Kokako coffee.

We rewound the tape, right back to 2012 when she and her partner Dylan, spotted the empty store that is now a space for conversation, coffee and fantastic food. Initially losing the lease to a purposed liquor store, Hannah’s perfect location was almost not an option. But with strong backing from the local community, the liquor store failed to obtain a liquor license and Open Table moved one step closer to becoming a reality.

In an attempt to get the ball rolling, Hannah organised community barbecues and handed out thousands of leaflets promoting her idea of a community-focused cafe.

“The community has backed us from start to finish” Hannah says. After raising $20,000 in donations in order to create such an inviting space, it’s as if she’s giving a little something back to the area she was born and raised in.

Open Table supports local producers and businesses. All of the available breads and pastries are supplied by Bread and Butter Bakery and it’s one of the first outlets to stock cold-pressed juice by Freshpress – itself located only a small stroll down the road.

Chatting to Pete, Hannah’s brother – who’s head of the kitchen for the time being – gave me a glimpse into the demandingly exciting life of a chef. He sticks by his word when he says his main goal is to “full people up on flavour” which doesn’t come as a surprise as it is obvious even from the footpath, that Open Table’s number one priority is quality.

Focused on providing food full of organic ingredients and flavour, Open Table ticks the once unchecked box, now providing a decent local. From the rough light blue walls to the rustic wooden tables, spending hours sipping on coffee and chatting in the afternoon sun is made easy.